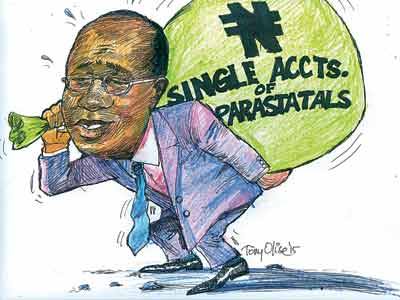 The Federal Government has generated over N2 trillion through the Treasury Single Account (TSA) since the commencement of the policy on Sept. 15, 2015.

Minister of Information Lai Mohammed made the disclosure at a Town Hall meeting held on Monday in Lagos.

The policy is meant to consolidate all inflows from Ministries, Departments and Agencies (MDAs) by way of deposit into commercial banks, traceable into a single account at the Central Bank of Nigeria (CBN).

“This administration has decided to plug all financial loopholes through the Treasury Single Account (TSA), into which over N2 trillion has accrued so far.

“Funds that ordinarily would have gone into private pockets are now finding their way into the public treasury, to be used for the benefit of all.

“Also, about 36,000 ghost workers have been discovered and weeded out, saving the government millions of naira,” the minister said.

According to him, the budget has recorded a first, with the capital expenditure being increased to 30 percent. “Beyond that, there are six social intervention areas that will directly touch the lives of millions of citizens and lift them out of poverty.”

Mohammed noted that 500,000 graduates would be employed and trained as teachers while 370,000 non-graduates (artisans, technicians) would be trained and employed, while one million people (farmers, market women, etc.) would be granted loans to set up small businesses.

He also noted that there would be Conditional Cash Transfer to the most vulnerable people; school feeding targeting 4.5 million school children; as well as Bursaries/Scholarships for STEM (Science, Technology, Engineering and Mathematics) students.

He urged all Nigerians to rise and be part of the war against corruption.

“Our nation’s economy or whatever is left of it, poses a great challenge.

“For one, we have lost a sizable chunk of our earnings to the massive crash in the price of oil.

“Think about this, if you lose 70 per cent of your monthly salary, your life can never be the same again,” Mohammed said.