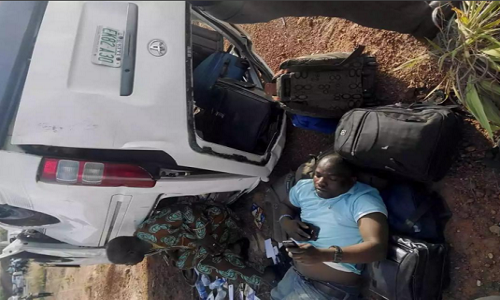 The Chairman, National Association of Government and General Medical and Dental Practitioners, NAGGMDP, in Ekiti State, Dr. Ekundare Folu, has debunked the claim by the Federal Road Safety Corps, FRSC, that over-speeding was responsible for Sunday’s road accident that claimed the lives of six medical doctors from the state.
This is just as he accused policemen of demanding N4,000 to move the corpses of the six doctors who died in the accident, to the morgue.
Ekiti State was thrown into mourning when 12 doctors heading to Sokoto for a free medical mission organized by the Nigerian Medical Association, NMA, were involved in a car crash along the Abuja-Kaduna express way.
The driver of the 18-seater bus and six doctors perished in the accident.
In an interview on Tuesday, the Sector Head of Operations, Kaduna State Sector Command of the FRSC, Deputy Corps Commander Salisu Galadunci, attributed the accident to over-speeding on the part of the late driver.
However, Folu, one of the six survivors of the accident, on Wednesday, denied that the driver was over-speeding when the accident occurred, pointing out that no FRSC official could have given a graphic detail of the accident, as they arrived 40 minutes late.

In a message posted on social media, the NAGGMDP chairman added that aside the financial gratification demanded by the policemen at the scene of the accident, an undisclosed amount of money was given to FRSC officials to buy fuel to take the injured to the hospital.
What he wrote on his Facebook page:
The comment credited to the Sector Head of Operations, Deputy Corps Commander, Salisu Galadunci, of the FRSC is very unfortunate.

This is an FRSC that got to scene of the accident more than 40minutes after the accident.

This is an FRSC that were reluctant to take us to the hospital claiming they don’t have fuel and didn’t budge until one of the injured promised to buy fuel for them.

The Deputy Corps Commander was not at the scene of the accident.

Neither himself nor any representative of his spoke to any of the people in the vehicle, 6 of whom myself included survived.

The Deputy Corps Commander did not even see the vehicle either at the scene of the accident or at the police station.

How he jumped to that conclusion is beyond me. The comments is an insult to my dead colleagues and a slap on those of us that survived.

For his information this is not a driver we picked off the road to take us for the journey. This is a man that has been working with us for more than 4 years. He is indirectly telling the world that a bus of 12 doctors including several senior consultants could not control a driver we employed and pay salaries to.

I was in the same vehicle sitting in the row behind the driver and I checked the speedometer from time to time. The bus also makes a beeping sound once the speed exceeds 110km/hr. Let me state categorically that the bus driver was not speeding.

The FRSC are probably only trying to justify their intention to sell their speed limiting device to Nigerians hence associating every possible accident to excessive speeding. And it is sad that they would even attempt to use such a sad event to do such.

Even the police would not convey the bodies to the mortuary in their van until we parted with 4000naira. I personally dropped 3000naira but the police officer rejected it, dropping the money on their vehicle until the NMA Chairman, Dr Akinbote, added N1500.

The second police vehicle that conveyed those of us unhurt and our luggage to join the others to the hospital also had to be topped with N3500 black market fuel paid for by me.

Gov Ayodele Fayose. God bless you for your care and support.

Special thanks to the Senator representing Doka LG in Kaduna for deeming it fit to visit us in the hospital.

The NMA Kaduna was also wonderful. Thank you so much. CMD neuropsychiatric hospital God bless you. All others who helped, assisted or visited us in Kaduna thank you.