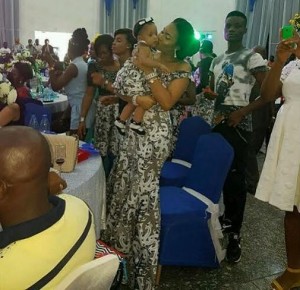 Ex-beauty queen and former most Beautiful Girl in Nigeria, Adaeze Yobo was a year older last week along with her two boys.

Adaeze who married former Nigerian Eagles captain, Joseph Yobo in 2010 hosted the first birthday party for her second child and the sixth for her first child at their Lekki home on Sunday,April 17, 2016.

Celebrities in attendance includes: Florence Ita-Giwa, Adunni Ade and others.

The former model was recently called out and accused of altering her age.

The actress in a post on her Instagram page revealed she will be 26 tomorrow and was trolled by fans for doctoring her age.