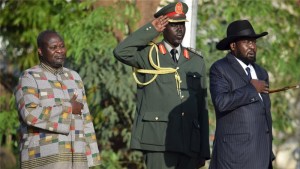 South Sudanese rebel leader Riek Machar has returned to Juba, an important step in ending South Sudan’s civil war.   After landing at the Juba International Airport on Tuesday, Machar was inaugurated as first Vice President of South Sudan by President Salva Kiir. It marked the formation of a unity government, and a fresh chance for South Sudan to rewrite its violent history.

“Our people are tired of war and they need peace, now,” said Kiir. “Together we can accomplish far more than when we are divided. Our strength lies only our unity.”  Since South Sudan’s war broke out in December 2013, 300,000 people have died by one estimate, and around 2.3 million South Sudaneae have become displaced. As it stands, the East African nation is in the midst of an economic and humanitarian crisis, and both sides of the civil war are accused of committing war crimes.

A deal between Kiir and Machar to end the civil war was signed in August, but fighting in some areas intensified after the agreement.

For the past eight months, Machar’s return has been the top priority for diplomats in Juba, as it marks the beginning of a unity government, and first substantive step in the peace deal.  “The war was vicious. We lost a lot of people in it, and we need to bring our people together so they can unite, reconcile, and heal the wounds,” Machar said. “As long as there is political will, we can overcome all of these challenges and all of these obsticles.”