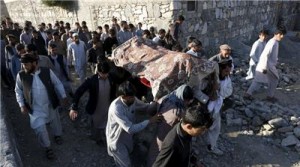 At least 12 people were killed and dozens wounded on Monday when a suicide bomber attacked a bus carrying Afghan army recruits near Afghanistan’s eastern city of Jalalabad, officials have said.  “It was a single suicide blast that killed 12 army recruits and wounded 38 others,” Ataullah Khogyani, spokesman for Nangarhar province, told Al Jazeera.

“The target was the army shuttle bus. These recruits were traveling to the capital Kabul for their training. All of them were young.” Ahsanullah Shinwari, head of the Jalalabad hospital, said on Monday that all 12 bodies were brought to the hospital in the city, 125 kilometers from Kabul. He said the rest of the 38 wounded were in critical condition.

The attacker was on a motorcycle when he rammed the bus, detonating explosives, according to Ahmad Ali Hazrat, chief of the Nangarhar provincial council. No group has claimed responsibility yet.   In another incident early Monday, a bomb hit a mini-bus carrying Afghan Education Ministry workers in Kabul, killing at least two people and wounding seven others.

The roadside bomb blew up as the bus was carrying workers to their offices in Kabul’s eastern Bagrami district, the ministry said. There was no immediate claim of responsibility.  Afghanistan’s precarious security was underlined late on Saturday when at least two rockets hit the diplomatic zone in Kabul only hours after US Secretary of State John Kerry had held meetings with Afghan government leaders in the capital. No injuries were reported.