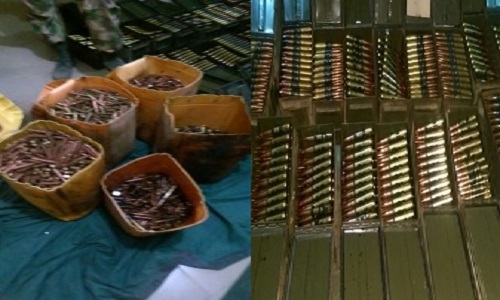 The Nigerian Army Monday announced that troops of Operation Lafiya Dole and some Civilian JTF on a clearance patrol to Brogozo-Alagarno general area, discovered large cache of arms and ammunition concealed by Boko Haram Terrorists.
The discovery, the Army said, was based on a tip off.
In a statement by its spokesperson, Sani Usman, the Army said the patrol team also cleared remnants of the terrorists dislodged from Alagarno Forest but who were taking refuge at Kadari, Camp Abu Fatima and Gursum.
“The troops discovered large cache of arms and ammunitions that include 36 boxes of .51mm caliber, 5 x 20 Lyra beefcake mixture of 7.62mm (NATO) ammunition, large quantity of 7.62mm (Special) ammunition and one 81mm mortar tube”, Mr. Usman, a colonel, said.
In addition, he said troops recovered 1 Toyota Hilux, 1 Generator and several motorcycles.
The statement reiterated the Nigerian Army’s appeal to all Nigerians especially residents of Adamawa, Borno and Yobe States, which are worse affected by the insurgency, to continue to provide useful information to troops in order to facilitate the final routing of the remnants of Boko Haram insurgents hiding in their localities.
Meanwhile, the Army said troops of 113 Battalion at Kareto, northern Borno, came under attack early hours of today.
However, the troops are currently engaged in a fierce battle with members of the sect.
The Army issued the alert on its verified Twitter handle some few hours ago.

Please be informed that our troops are currently engaged in fierce battle with Boko Haram terrorists at Kareto, Northern Borno. Details soon