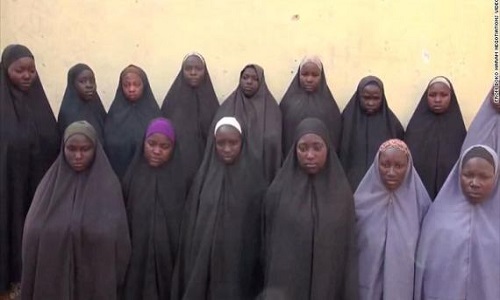 Exactly two years after the horrific abduction of 276 girls from their hostels in Government Girls Secondary School, Chibok, Borno State, by Boko Haram Terrorists, a new video showing 15 of the girls as a “proof of life”, has surfaced.
While a few dozen were able to escape to tell the story of the horror visited on their school by the terrorists, those taken have never been seen since, with no solid indication as to their whereabouts having yet been established.
The video, obtained by the CNN, is believed to have been made in December last year, and is being used as collateral in discussions between Nigeria and the insurgents.
In it, the girls – all dressed in long, flowing robes also known as abaya with their hair covered – state their names, their school and where they are from.
The girls also show no visible signs of injury or maltreatment and do not look malnourished.
The video was played by CNN to some of the mothers of the missing girls, who betray their emotions as they recognise all of the pupils lined up against a wall in the clip played on a laptop.
That is the closest the mothers have been to their abducted daughters in two years, rekindling hopes of a possible reunion.
For some, their daughters are pictured. For others, their girls are not seen.
Rifkatu Ayuba is one of the mothers whose 17-year-old Saratu, was shown in the clip. 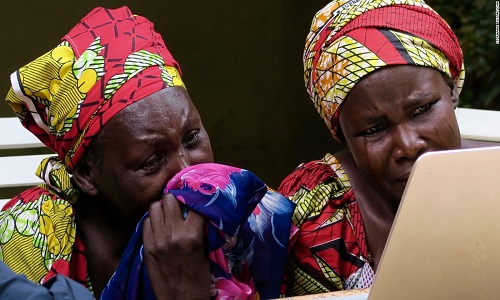 Upon seeing her, she wails “My Saratu!” as she reaches desperately to grab a hold of the laptop placed in front of her.
Ayuba said: “I felt like removing her from the screen. If I could, I would have removed her from the screen”.
As the two minute clip comes to an end, one of the girls, Naomi Zakaria, launches a final – apparently scripted – appeal to whoever is watching, urging the Nigerian authorities to help reunite them with their families.
“I am speaking on 25 December 2015, on behalf of all the Chibok girls and we are all well”, she says.
The date given by Ms Zakaria matches information embedded in the video, suggesting it was filmed on Christmas Day, CNN reports.
This report was initially published by CNN.