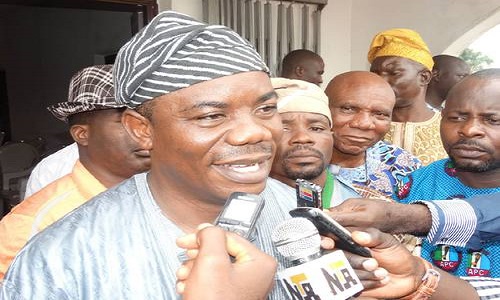 The Ondo State chapter of All Progressives Congress (APC) has described the just-concluded local government election as a fraud perpetrated by the Peoples Democratic Party (PDP).
The Ondo State Independent Electoral Commission, ONSIEC, had declared the PDP winner in all the local government areas following a boycott of the exercise by the APC and majority of other political parties in the state.
The Ondo APC Chairman, Isaac Kekemeke, said if forensic investigation is conducted on the ballot papers used, it will reveal they were thumb-printed by just a few people.
Mr. Kekemeke, who spoke during a reception ceremony for PDP members that recently joined the APC, said the figure of over 600,000 released by ONSIEC as the total number of voters in an election reported as having widespread voters apathy, is far from being credible.
He wondered why the PDP decided to rig an election in which it was the only contesting party.
The APC chairman recalled that during the last governorship election with large voters turnout, the total number of votes amassed by the then leading Labour Party (LP) under which Governor Olusegun Mimiko contested before defecting to the PDP, was a little above 200,000 votes while the combined votes of the LP, the PDP and that of the defunct Action Congress of Nigeria (ACN) was just 400,000.
Kekemeke, therefore, wondered how the PDP-led government came about 600,000 in local government polls that witnessed very low turn-out of voters.
According to him: “The polling unit where Mimiko was reported to have voted had only 21 voters, and this number of voters multiplied by the total polling units across the state would give you about 45,000 votes. How do you explain the difference?”
“What we have now in Ondo State is a union of people who can no longer endure the pain and hardship caused by this PDP government.
“Today is a manifestation of the willingness of Ondo people to change the PDP.
“I want to assure members that there shall be no imposition of candidate”.
Kekemeke also cautioned some party members, who he claimed are abusing party aspirants on social media, to desist.