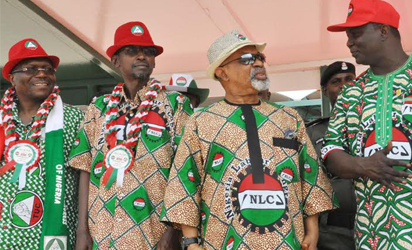 The meeting between organized labour and the Federal Government ended on a good note on Tuesday with Secretary to the Government of the Federation, Engineer Babachir David Lawal, announcing the appointment of Alhaji Mohammed Lawan Buba as chairman of the Petroleum Products Pricing Regulatory Agency (PPPRA).
Buba is a former Director General of the Petroleum Products Marketing Company (PPMC) and also a former Group Executive Director of Commercial and Investment at the Nigerian National Petroleum Corporation, NNPC.
The meeting was held in Abuja to review issues involved in the new pump price of petrol recently announced by the federal government.
The reconstitution of the PPPRA board, which has the statutory role of determining and fixing the prices of petroleum products, was one of the major issues raised by organized labour during its indefinite strike last week.
The Comrade Ayuba Wabba-led faction of the Nigerian Labour Congress, NLC, which embarked on indefinite strike action last Wednesday but suspended the industrial action on Sunday, resolved to enter into negotiation with the federal government on the review of minimum wage for workers, the recent hike in electricity tariff as well as palliatives to cushion the effect of the increase in pump price of petrol.
Speaking yesterday at the end of the meeting, which was attended by representatives of the organized labour including Wabba and Minister of Labour and Employment, Senator Chris Ngige, the SGF said President Muhammadu Buhari had approved the appointment of Buba, adding that the appointee had also expressed willingness to serve on the board.
Mr. Lawal also said a 16-man committee had been set up to look into the various issues that arose as a result of the hike in price of petrol such as the minimum wage, implementation of the N500bn palliative in the 2016 budget as well as the review of the pump price.
In his remarks, Ngige said review of the minimum wage was a tripartite negotiation arrangement, adding that the 16-man committee was expected to work out the framework to constitute the committee for the minimum wage review.
“I chair the committee and we are waiting for the NLC to forward their nominees so that the committee can be inaugurated sometime next week,” he said.
Responding to questions from journalists, Wabba, who led other labour leaders to the meeting, hailed the meeting as a success.