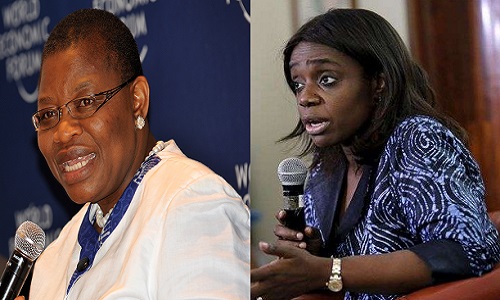 The Minister of Finance, Kemi Adeosun, on Thursday faulted the recent statement credited to a former World Bank Vice President, Oby Ezekwesili that the Muhammadu Buhari administration’s “archaic and opaque” economic policies are hurting the poor.
Ezekwesili, a former Solid Minerals and later Education Minister, who spoke as one of the guests at The Platform, a public policy forum in Abuja on Saturday, accused President Buhari of rehashing his “command and control” approach to economic issues adopted during his first stint as military Head of State in 1984.
According to the former minister, inflation at the time had spiraled out of control, amid huge loss of jobs and a massive dip in economic growth level.
“What did not work in 1984 cannot possibly be a solution in a global economy that’s much more integrated”, Mrs. Ezekwesili pointed out. “The same ‘command and control’ approach towards economic issues has left the country’s economic indices worse off since he assumed office almost year ago.
“In over one year, the president is still holding to the premise that command and control is the only way out. In a year, we have lost the single digits inflation status we maintained in past administrations”, she said.
The former World Bank VP, who was a thorn in the flesh of the past administration, said the Buhari administration’s distortion of the foreign exchange system has left the poor it sought to protect worse off, while opaque economic policies were not only encouraging massive corruption, but abuse of power.
But, speaking when she appeared as a guest on Channels TV breakfast programme, Sunrise Daily on Thursday, Adeosun disagreed with Ezekwesili, saying although there were no quick fixes to the country’s economic challenges, the Buhari administration was handling the issues with a planned strategy.
“I disagree with Mrs Ezekwesili,” Mrs. Adeosun said. “The present government has a planned economy and does not operate a command and control economic system as alleged by the former minister.
“There are no quick solutions to the current economic woes. We are going to pump N350 billion into the economy until we see growth. The job will be done painstakingly, and we will come out of it better”, she assured.
The Minister, however, admitted that one of the biggest challenges the present administration was facing was leakage of revenues in ministries departments and agencies.
Mrs. Adeosun said the government expects to see the expenditure of N64 billion on official travels in 2014 drop by about N13.88 billion.
She said such savings from official travels, which should ordinarily not be a major expense item for the government, would become available for investment in capital projects, such as roads, power, railways and public health facilities.
To reduce the high incidence of cash transactions in government business, the minister said deployment of Ministerial Debit Cards would soon debut to reduce stealing by government officials and to enable easy tracing of e-expenditures.