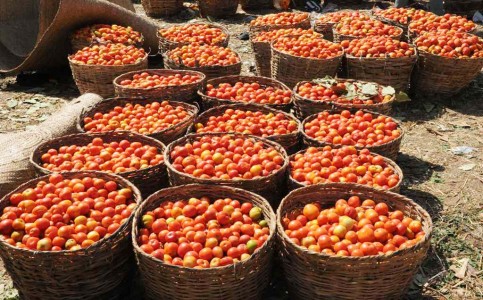 A state of emergency has been declared on tomato in Kaduna State by the government.
Our correspondent reports that of late, tomato has been a scarce commodity in most cities across the country with a basket of the produce, which went for between N7,000 and N14,000 now going for as high as N42,000 in Kaduna.
Addressing a press conference on the first anniversary of the Governor Nasir El-Rufai administration in Kaduna, the Commissioner for Agriculture and Forestry in the state, Dr. Manzo Daniel, blamed the scarcity on tomato blight, which he said has destroyed 80 per cent of tomato farms in the state.
“The tomato blight is caused by an insect called the leaf miner, scientifically called tuta absoluta. What it does is to eat up the tomato leaves and the soft parts. Unfortunately for us, this infestation occurred last year on a smaller scale but it was not documented. And when we came in, we didn’t know about it until it hit us hard”, the commissioner said.
Mr. Daniel, however, said “A team of officials have been dispatched to Kenya to seek intervention. We have it on authority that there is an extract of a plant that is effective against the developing stages of the moth. Unfortunately, the adults are not susceptible to any chemical, if you spray them, within three hours, they develop resistance. It is a serious issue and we have had to declare a state of emergency on the commodity”.
He noted that to underscore the seriousness of the infestation, the Dangote Tomato factory in neighbouring Kano State, has shut down due to lack of raw materials”.
According to the Agric. commissioner, survey is ongoing, as over 200 farmers have been identified in three local government areas of the state with loses to the tune of N1billion.
“We expect our partners from Kenya to move in quickly and we are developing intervention strategy for immediate, short and long term”, he said, adding that about eight other states in the northern region are also affected by the disease.
In a related development, the President and Chief Executive Officer of Erisco Foods Limited, Chief Eric Umeofia, has distanced local tomato paste companies in the country from the scarcity of the produce.
Mr. Umeofia said rather than accuse the local tomato paste manufacturers of massively buying up the commodity to ensure its scarcity in the markets, Nigerians should blame some cabals, who he accused of importing tomato paste and refused to support local tomato farmers to produce high yielding and heat resistant tomato.