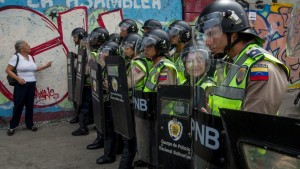 Riot police fired tear gas and blocked 1,000-strong anti-government protests in the centre of Caracas, which is one of the 20 opposition rallies taking place across Venezuela. Today’s demonstrations in the capital marked the first major test of a state of emergency that the President, Nicolas Maduro imposed this week which gives broad powers to security forces so as  to ensure public order.

The protesters demanded authorities to stop wasting time over a recall referendum which was called for by a petition which has with 1.8 million signatures. Maduro has refereed to the referendum “not viable.” Hundreds of officers in Caracas with shields and helmets as well as pepper spray formed a barrier to prevent the protesters, headed by Henrique Capriles, the opposition leader from reaching the headquarters of the National Electoral Council which has been parsing the petition for two weeks.

Not less than 14 metro stations in the heart of Caracas were closed for “operational reasons” on Wednesday. Capriles said at the demonstration that “the referendum can be held this year, and you know this. Let’s avoid an explosion of public frustration,” Some police officers fired tear gas at the demonstrators, some of whom threw bottles and stones. Not less than four people were arrested.