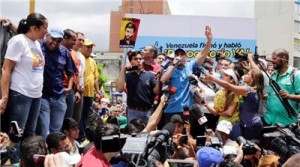 Rival protests have taken place in Venezuela after President Nicolas Maduro extended a state of emergency to combat the “foreign aggression” he blamed for the economic crisis in the country. The opposition called on protesters on Saturday to flood an avenue in western Caracas to push the authorities to allow a referendum to remove Maduro from power, in line with the constitution.

Maduro’s camp called a rival demonstration in the centre of the capital, where he was to announce new measures to address a crippling recession that has led to food shortages, soaring prices, riots, looting and vigilante justice.

“The opposition protesters are trying to put pressure on the government and the electoral body to hold the referendum,” Al Jazeera’s John Holman, reporting from Caracas, said. “The government protesters, on the other hand, blame outside powers for the crisis and see the opposition camp as ‘rich people’ trying to take advantage of the current economic situation,” he added.

The economic crisis, together with an electricity shortage, forced the government to decree daily power cuts across most of the country, close schools on Fridays, and reduce the workweek to two days for government employees. The embattled president first declared a state of “economic emergency” in January, which was expanded on Friday to a full-blown state of emergency to fight what he called “threats from abroad.”