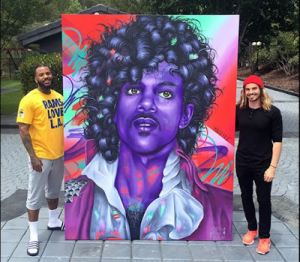 American rapper, The Game is now the proud owner of a luxury customized painting of late music icon, Prince, worth $65,000.

TMZ reports that the rapper had reportedly contracted an artist identified as Madsteez, to create the stunning portrait of the late singer after he had passed away on, April 21, 2016.

The piece is meant to be his personal tribute to Prince and had reportedly taken 100 hours to complete.

Photos shows Game and Madsteez pictured on both sides of the painting which towers over them at almost seven feet.

The painting reportedly a combination of oil, acrylic and spray paints now graces The game’s living room in its bold glory.