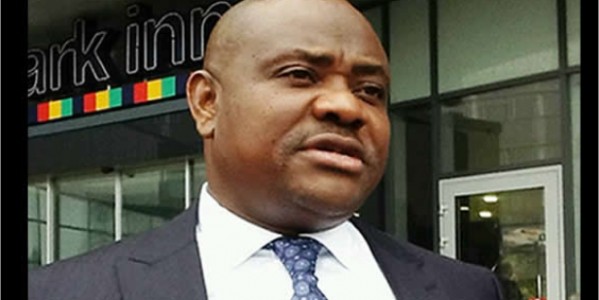 Governor of Rivers State, Chief Nyesom Wike is currently at the Aso Rock Presidential Villa in Abuja, where he is holding a closed-door meeting President Muhammadu Buhari.
Wike, who was elected governor of Rivers on the platform of the Peoples Democratic Party, PDP, and one of the staunch critics of the Buhari administration’s anti-corruption war, recently pledged to partner with the All Progressives Congress-led federal government on any initiative that will be of benefit to the state and its people.
The reason for the governor’s visit to the Villa is yet to be disclosed but our correspondent reports that it might not be unconnected with his (Wike’s) recent pledge to work with the APC-led federal government especially in view of the recent upsurge of violence and politically-motivated killings in the state as well as the president’s forthcoming trip to the state on June 2 to launch the clean-up of Ogoni land, recommended by the United Nations Environment Programme (UNEP).
As at the time of publishing this report, Wike, who arrived Buhari’s office at about 2.00pm, was still meeting with the president.
Details later….

****UPDATE****
Gov. Wike, who arrived around 2 p.m only stayed for about twenty minutes before taking his leave at the end of the meeting.
When approached by State House correspondents that wanted to know the purpose of his visit to the Villa, he declined to speak as he quickly walked past the journalists.