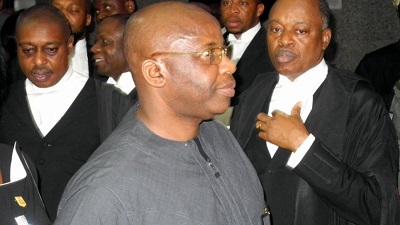 The Federal Government has asked the former Governor of Imo State, Ikedi Ohakim, to defend himself in his ongoing trial for money laundering at the Federal High Court, Abuja.
The former governor is standing trial before the court on three-count charges of money laundering and false asset declaration brought against him by the Economic and Financial Crimes Commission (EFCC).
Ohakim, who was governor of Imo between 2007 and 2011, was accused of purchasing a property at 60, Kwame Nkrumah Street, Plot No 1098, Cadastral ZoneA04, Asokoro District, Abuja, with a cash payment of $2.29million (N270 million) in November 2008.
He was also accused of failing to declare the property as part of his asset to the anti-graft agency.
The prosecution lawyer, Festus Keyamo, on Monday urged the court to reject the no-case submission made by Ohakim’s lawyer, Awa Kalu (SAN).
According to Keyamo, the prosecution had shown sufficient evidence to establish its case against the defendant.
Keyamo, who adopted his written submission in opposition to Ohakim’s no-case submission, pointed out that the defendant had in his statement to the EFCC admitted making payment for the property in dollars, but later changed it to say payment was made in naira.
Justice Adeniyi Ademola reserved June 30 for ruling on the former governor’s no-case submission.