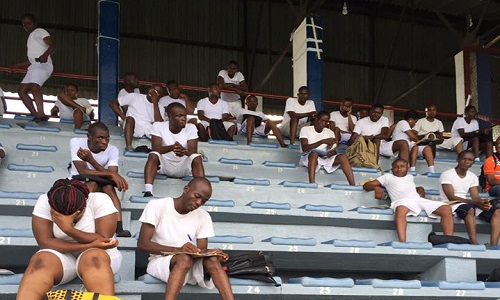 As the screening of applicants into the Nigeria Police Force commenced nationwide on Monday, the Enugu State Police Command has said persons with tattoo on their bodies would be disqualified.
The Public Relations Officer of the command, Ebere Amaraizu, told the News Agency of Nigeria (NAN) in Enugu on Monday that the measure was part of the rules for the recruitment.
Mr. Amaraizu said procedures for the screening had been put in place by the police authorities and that those that were shortlisted for the interview had been communicated through the email addresses they provided.
“The present recruitment is for degree holders and will last for three weeks and after that, the selected ones will proceed for the written interview.
“Over aged people, tattooed persons, falsified results, statement of results over five years and people with some physical impediments will be disqualified from the exercise”, he said.
On the number of applicants shortlisted in Enugu, the police spokesman said that would be determined after the exercise.
“All I know is that 10,000 people will be recruited nationwide but I do not know the number of those that will be recruited in Enugu zone.
“We have started and you can see that it is going on peacefully.
“The exercise is done in batches to avoid any form of rush or stampede.
“This command will screen the applicants thoroughly to ensure that the best get the Job”, he said.
Some of the shortlisted candidates, who spoke with reporters at the venue of the screening, expressed satisfaction with the transparent and peaceful nature of the exercise.
They, however, called for more hands to expedite the recruitment process.
(NAN)