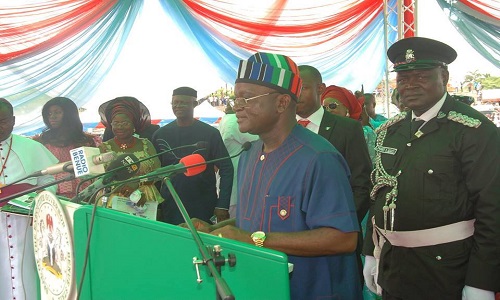 An Executive Bill outlawing open grazing of livestock and establishment of ranches in Benue State has been sent by Governor Samuel Ortom to the state House of Assembly.

The bill when passed into law, criminalizes grazing in any part of the middle-belt state, which has been at the receiving end of invasions by armed herdsmen.
Speaking when he played host to people from Agatu and Apa local government areas of the state yesterday following recent herdsmen attacks, Gov. Ortom said the bill was approved by his cabinet members and has since been submitted to the House of Assembly.
He said, “We have sent an executive bill to the state Assembly, that there should be no grazing at all in Benue. When the bill is passed into law, any herdsmen that brings cattle to the state will go to jail”.
The governor expressed determination that it would no longer be business as usual as grazing and farming can never be compatible, especially at a time such as this when the country is returning to seeking to diversify the economy and boost revenue by turning to agriculture.
Earlier, leader of the delegation and Odejo Ka’Apa, Chief John Antenyi, called for the setting up of a commission to enable the rehabilitation of destroyed communities, establishment of a military base in the area to forestall further invasion, provision of a tertiary institution and other basic infrastructure.