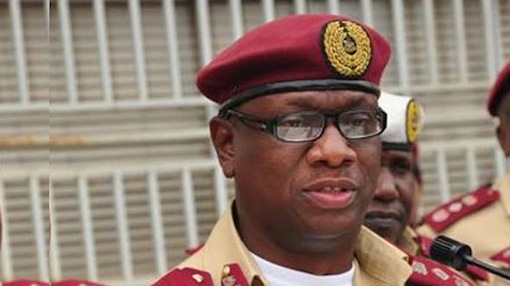 The Federal Road Safety Corps, FRSC, has said that it is not carrying out a recruitment exercise and warned Nigerians against falling victim of the antics of scammers.
The FRSC Corps Marshal, Mr. Boboye Oyeyemi, who denied the purported recruitment exercise, also warned officials of the corps against peddling such rumours, adding that if caught, they would be punished in accordance with the FRSC Disciplinary Codes.
A statement by the Head, Media Relations and Strategy, FRSC, Bisi Kazeem, quoted Mr. Oyeyemi as saying these on Monday, while addressing staff of the National Headquarters at the Corps Marshal’s weekly Parade in Abuja.
“My attention was drawn to the rumour, and I want to put it directly to you, that FRSC is neither recruiting nor doing any form of replacement as people are insinuating outside”, he said.
The FRSC boss attributed the rumour to fraudsters, whose aim he said, was to dupe unsuspecting members of the public.
He assured the general public that the FRSC would follow due process and ensure wide publicity whenever it is carrying out a recruitment exercise.
Mr. Oyeyemi further warned officials of the corps against indiscipline and criminality, disclosing that he was disturbed by reports that some officials of the corps were involved in crime and the peddling of rumours.
“I am disturbed by the activities of some staff members, who are fond of rushing to the media, especially radio, to spread lies that undermine the integrity of the FRSC”, he said.
“That must stop forthwith. I have made it clear before that I would never allow anything that goes against the interest of the staff, and I stand by that commitment”.