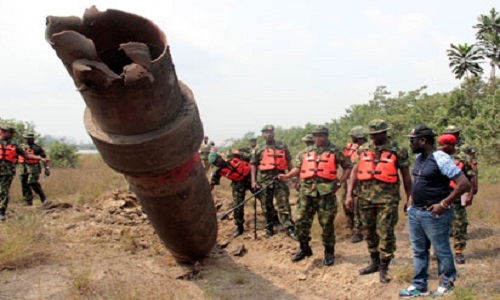 The vigilance of troops of the Joint Task Force in the Niger Delta codenamed “Operation Pulo Shield” has paid off after an attempt by suspected vandals to blow up pipelines belonging to the Nigerian Agip Oil Company (NAOC) in Okpoama, Brass local government area of Bayelsa State, was foiled on Friday.
The Coordinator, Joint Media Campaign Centre (JMCC), Ado Isa, in a statement on Friday, said the suspects planted dynamites beneath the pipeline location in a swamp before the troops discovered it.
Mr. Isa, a Colonel, named the items recovered from the scene as two dynamite detonators, cable wire and battery.
According to the statement, the troops deployed in Ogbia local government area of the state, carried out anti-illegal oil bunkering patrol and cordon-and-search operation along Ebelebiri and Agba communities.
It said during the operation, six suspected pipeline vandals were arrested along with eight Cotonou boats loaded with illegally acquired crude oil.
Col. Isa said the sites and the recovered items were destroyed immediately, while the suspects were handed over to the prosecuting agency.
“On same day, OPS troops, in continuation of its raid on suspected pipeline vandals’ camps carried out cordon-and-search operation in Oporoma Community of Delta State.
“10 suspected pipeline vandals were arrested during the operation and the following items were recovered from them: one pistol, 195 rounds of 7.62mm special ammunition, 14 handheld radio sets, diving equipment, personal computer, IPAD, 30 detonating codes and several cell phones with SIM cards belonging to telecoms companies, among others”, he added.