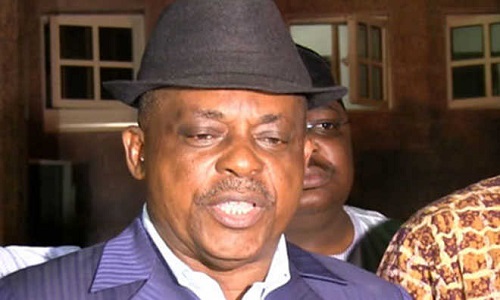 The immediate past Deputy National Chairman of the Peoples Democratic Party, PDP, Prince Uche Secondus, has charged the President Muhammadu Buhari-led All Progressives Congress federal Government to stop causing more problems for the country and set out to tackle the myriads it already created.

Rather than make efforts to address the major socio economic issues weighing down Nigerians due to the confusion and lack of direction of the government in the last one year, the former acting chairman of the PDP noted that the APC-led federal government is rather busy creating more battle fronts and compounding the challenges of the county.

“Today under APC leadership the country has become a whole theatre of acrimony with agitations here and there with no clear sign of solution in sight forcing political watchers to question if the country is disintegrating.

“Even the Boko haram issue that was supposed to be progressing well has run into troubled waters because of the confusion in the ruling party.

READ: 6 Things PDP’s Secondus Has To Say About Nigeria Under Buhari

“Ditto the federal Government’s anti-corruption fight is even skewed due to insincerity as Ministers already confirmed to be corrupt internationally continue to move untouched while Governors with immunity are harassed daily.

“Rather than confront the various challenges overwhelming the country, APC is currently bleeding soaked in its own greed and the obvious consequence is that a house divided against itself is bound to fall and the party is already falling”, said Secondus in a statement, which he personally signed.

The former PDP boss said that the federal Government under Buhari’s watch is gradually eroding all indices of democratic principles especially those anchored on the rule of law and seperation of power as it has continued to violate all rules of free speech as enshrined in our status.

“Unlike what the world is watching in Britain where democracy is being put into action and in America where President Barak Obama is being routinely criticized, Nigerians are leaving in fear, the press, judiciary, and politicians are in heavy apprehension because of the draconian system of our operatives who come after them for airing their views”, he said.

The PDP chieftain, therefore, advised the Government to respect various organs of governance and stop seeing itself as what he termed the “Lord Mayor of state Governors and the National Assembly”, saying doing otherwise will amount to dictatorship.

Secondus faulted the ongoing trial of the Senate President, Bukola Saraki and his deputy, Ike Ekweremadu, for alleged forgery of the Senate Standing Rules, describing it as an attempt to humiliate and intimidate the National Assembly.

He warned that the trial is setting a dangerous precedent as the parliament remains the opium of democracy.

According to Secondus, while federal Government creates more and more problems it leaves unattended to very critical projects.

He cited the official flag-off of the Ogoniland clean-up exercise, saying despite the hype by the APC-led federal government, nothing is happening in the project.

He said this is in contrast to Governor Nyesom Wike’s massive opening up of Ogoni roads, which were neglected over the years.

Mr. Secondus said that “APC should note that after one year in office, deceit by propaganda and lies can no longer be sustained as Nigerians now know better that inside the noisy drum is nothing but confusion and lack of direction”.

He further warned the APC, which he labeled a disorganized team, to gauge the pulse of their various actions and inactions and stop moving the ship of state dangerously to avoidable turmoil as Nigerians are still waiting for all the wonders they promised.