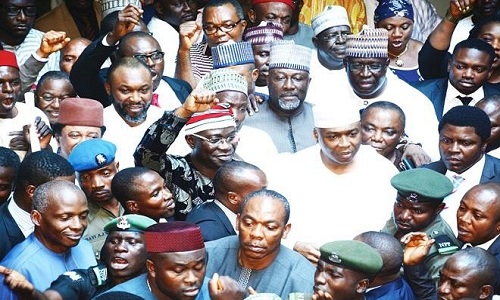 The senator representing Kaduna Central on the platform of All Progressives Congress, APC, Shehu Sani, has tutored the embattled Senate President, Bukola Saraki and his Deputy, Ike Ekweremadu on how to survive in prison.

Sen. Sani, who is Chairman of the Senate Committee on Local and Foreign Debts, reportedly gave the Senate leadership prison lessons on Monday.

Sani, a prominent civil rights activist, who spent four years in various prisons across the country during the military regime of late dictator, General Sani Abacha, tutored Messrs. Saraki and Ekweremadu at the Court during their forgery case.

A senator, who was at the Court on Monday, said Sani lectured the accused persons when Justice Yusuf Halilu stood down the forgery suit for one hour.

“Sani came and lectured the presiding officers on life in the prison. He told them that in the prison there is ranking rule like at the National Assembly. He advised them to cooperate with the ‘Governor’ in the prison.

“He said after registration, they will be given plates for meals. Sani also told them that they are going to share toilet, bathroom with other inmates and that it is the Governor of the prison that will allocate bed space to them”, said the senator, who spoke on the condition of anonymity.

“Yes, is anything bad in what I did?  They are my colleagues and as a former inmates, I felt I should educate them on how to live in the prison, so that they will not be caught unaware”, he said.