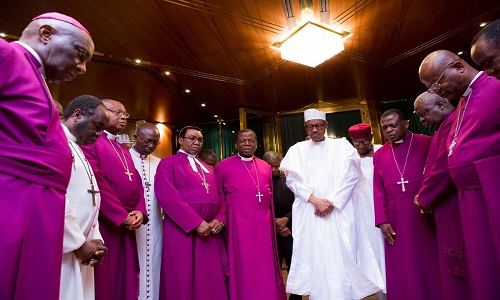 President Muhammadu Buhari on Friday received in audience at the Presidential Villa, Abuja, a delegation of Bishops of the Church of Nigeria (Anglican Communion) led by the Primate of the church, Archbishop Nicholas Okoh.
The clerics’ visit came shortly after ex-President Olusegun Obasanjo also departed the Presidential Villa, where he met behind closed doors with President Buhari.
Archbishop Okoh, who spoke to State House Correspondents at the end of the meeting, said that they came to discuss the state of the nation with the president.
“We told him many things. We are all looking for solution to issues of the herdsmen, issue of vandalism, security in one way or the other because the people are asking us and we want to have explanation for the people whom we lead”, he said.
Asked what Mr. Buhari’s disposition was on the issues they raised during the visit, the Primate said: “very favourable. He gave us detailed explanations of what he is doing to ensure that these things are solved.
“So we have hope, we have a message for our people”.
Okoh opined that President Buhari spent his first year in office clearing the stable and was optimistic that things will improve in the country over the next one year.
“We believe that so far it’s been okay because of the difficulties of the times and between now and the next one year we are looking forward to something more direct now, something that will get to the people easily.
“So far, for the first year he is trying to clear the table, prepare the place and make the work move forward.
“We look forward to a better 2016-2017 budget .You can see that with the long delay in budget, with the issue of padding, we were not able to begin easily.
“So the next one we know will be better. That is why we are taking it that way. It’s okay for now but it could be better”, he added.