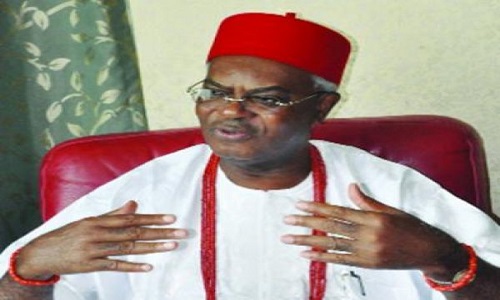 The Obi of Onitsha, HRM Igwe Nnaemeka Achebe, has called on President Muhammadu Buhari to revisit the recommendations of the 2005 and 2014 National Conferences to address prevailing challenges in the country.
Achebe made the call against the backdrop of a statement credited to the president that the report of the 2014 national confab is meant for the archives.
The first class traditional ruler, who made copious references to the 2005 National Political Reform Conference convened by ex-President Olusegun Obasanjo and the 2014 National Conference by ex-President Goodluck Jonathan, argued that if the recommendations could be extracted and implemented, 80 per cent of the nation’s problems would have been resolved.
Igwe Achebe spoke at a reception held in his honour by the Ibadan School of Government and Public Policy (ISGPP), Bodija, Ibadan.
The monarch also described the recent killings of innocent Nigerians by armed herdsmen as unfortunate and barbaric.
According to him, the herdsmen should have learnt modern methods of rearing cows through the establishment of ranches to preserve the animals and prevent them from destroying farmlands.
“There is no way the animals would not stray to other people’s farms. I think that in the present day 21st century, we should be having ranches even if it involves taking loan from the banks.
“They rear the animals to make profit, so I don’t see why they cannot do that and prevent all these crises”, he said.
Achebe said Nigeria’s challenges would have been lighter if the recommendations of the past National Conferences were implemented.
“We as Nigerians have to work to actualise peace. Nigerians are probably saying that the governance of this country is over centralized.
“Most of the decisions are made in Abuja and by the time it gets to the grassroots here most of them have been diluted.
“The Niger Delta people are asking for greater share of the natural resource. Like in 2005 and 2014, we had National political conferences under former President Olusegun Obasanjo and immediate past President Jonathan.
“They conveyed National Conferences and if you look at the recommendations, you will see that the recommendations actually addressed 75 to 80 percent of the problems facing Nigeria.
“Why can’t we extract from the recommendations to solve these crisis in the land. The case of the Niger Delta people, you will find the recommendation there in the report”.
He continued: “About a month ago, the government announced that the price of petrol had been partially deregulated.
“Thirteen years ago, I was the chairman of a commission of enquiry appointed by the then president Olusegun Obasanjo to look into the same issue.
“We made a series of recommendations. One of them was to deregulate the price of petrol and save the country a lot of money.
“Money saved would have been used to address problems in education, health and other sectors. It took 13 years to adopt the recommendation”.