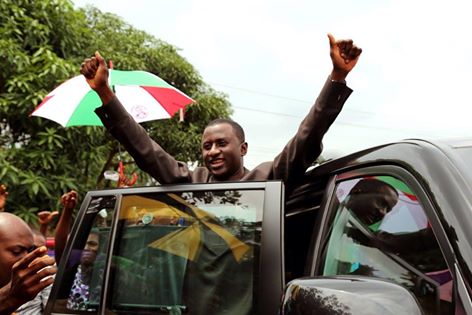 Some Abia State leaders, including traditional rulers, traditional prime ministers and others, have called for the immediate swearing-in of the governor-elect of the state, Dr Uche Ogah.

Swearing-in Ogah, they said, was the wish of Abians.

The group noted that no amount of intimidation would make the governor-elect renounce his mandate as he had always said he would not dump the Peoples Democratic Party (PDP) since it was where his destiny of becoming the governor of the state lay.

Addressing reporters in Umuahia, the state capital, while reading a communiqué at the end of their meeting yesterday, the leader of the group and traditional prime minister of Ibeku Kingdom, Chief Uche Akwukwaegbu, said there was no alternative to Ogah.

Akwukwaegbu said: “This forum frowns at the negative reactions of some reactionary forces who see the Abuja High Court and INEC decision as hasty, as people who are used to disobeying court orders, which President Muhammadu Buhari’s administration is fighting hard to change.

“This forum views the attitude and reaction of the Adolphus Wabara-led Abia Concerned Elders as that of people who are yet to cue into the President Buhari change mantra.

“The public is advised to disregard the information contained in the communiqué as sponsored by those who have contributed in no small measure to the collapse and stunted growth of our dear Abia State.

“This forum would not have responded to the communiqué, as published in the media by the so-called Concerned Elders, if not for the falsehood, distortion of facts and misleading effects on the people as contained in their so-called communiqué.

“As the true representatives of the people of Abia State, we condemn the purported meeting in Abuja by some people from Abia State in the name of Concerned Elders of the state as their resolutions do not reflect in any way the reality on the ground.

“The true position of things in Abia is that all Abians – male and female, young and old, irrespective of clan, religion and political group – are yearning for Dr Uche Ogah, hence the hilarious and wild celebration that was witnessed on all streets and villages in the state.

“All interest groups, professional bodies, youths and women’s groups and community leaders passionately desire a turnaround in the state, and everyone is happy that a court of law has finally restored the mandate of the people’s choice, Dr Ogah.

“Consequently, we urge the Wabara-led acclaimed Elders’ Forum not to pretend that it does not know the right thing to do, which is to advise ‘former’ governor of the state to honourably quit and respect the rule of law.

“We, therefore, emphatically declare our unwavering support for the court ruling, demanding the swearing-in of Dr Ogah immediately, as the Abuja Federal High Court ordered”.

The communiqué, which was signed by 23 members, said the groups would continue to stand on the side of truth and patriotism, as exemplified by the Abuja Federal High Court, which is to swear in Ogah as Abia State governor.