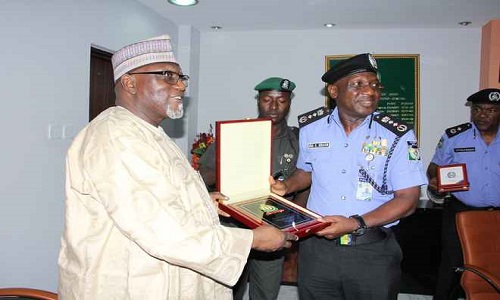 The acting Inspector General of Police Ibrahim Idris on Tuesday visited the Director General, Department of State Services, Lawal Musa Daura, in Abuja in continuation of his familiarization visit to security agencies.

During the visit to the DSS, Idris told Daura that he was seeking the cooperation and collaboration of the service in tackling the security challenges facing the country.

A statement by the Force Public Relations Officer, DCP Don N. Awunah, said the acting IGP told the DSS boss that it is only through synergy with relevant security agencies that the current security challenges can be overcome.

In his response, Mr. Daura assured the acting IGP that the DSS will give maximum support and cooperation to Mr. Idris in ensuring that the country overcomes its security challenges.

He further said the cooperation is incumbent on the DSS, because it has historical link with the Nigeria Police.

The DSS boss also said that the country is expecting more from Mr. Idris, having seen his track record in policing that span within Nigeria and abroad.