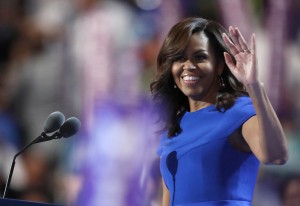 Michelle Obama proved the perfect Trump antidote and drew a ‘wow’ from Bill Clinton as she declared: ‘Because of Hillary Clinton, my daughters … take for granted that a woman can be president’.

The former president was in the audience on Monday along with other party bigwigs as they watch her profound, moving and devastating riposte to Donald Trump that many in America, and the world, had been waiting for.

On Twitter, her husband President Obama wrote: “Incredible speech by an incredible woman.”