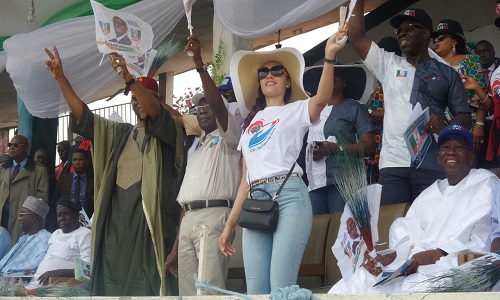 Governor Adams Oshiomhole of Edo State has called on Nigerians to continue to have faith in President Muhammadu Buhari in his resolve to reposition the country.

Speaking during the official flag-off of the governorship election campaign of the All Progressive Congress (APC) in Benin City, the state capital, the governor said “for the first time, we have seen a president calling on senior military officers, ministers and governors to account for their stewardship”.

“I urge you to have confidence in President Buhari.  He inherited a house that had been bastardized for 16 years, even the money meant for Defence was converted to pit latrine and one of those who collected part of the money for election is running for Edo governorship election.

“The problem then was that Boko Haram members were attacking churches and mosques which shows that they were just terrorists. This money was therefore appropriated to protect churches by a Christian president but what happened, the Christian president took the money and gave it to some people to use for politics”, he said.

Mr. Oshiomhole called on the anti-graft agencies not to exclude anyone who benefitted from the arms money.

“We know that corruption would fight back and it is already fighting back. That was the reason we went for a tested and dogged General to lead the corruption fight and he is winning the war. Now, we are hearing some people talking of impeachment or no impeachment. Nigerian people unconditionally have resolved to support democracy and President Buhari”, he said.

While urging the people to support the party’s flag bearer in the September 10 governorship poll, Godwin Obaseki, who, according to him is the brain behind his achievement, Gov. Oshiomhole said for 10 years of the Peoples Democratic Party’s rule, the state was stagnant, “but in seven years, APC has changed the state to a modern one”.

Presenting the party’s flag to Obaseki, the APC National Chairman and first executive governor of Edo State, Chief John Odigie-Oyegun, urged people of the state not to “give up the eight years of development to the PDP 10 years of holocaust”.