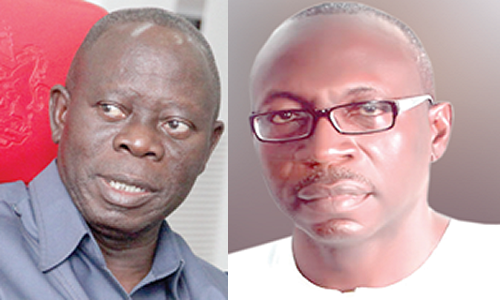 Governor Adams Oshiomhole of Edo State yesterday described threats by Pastor Osagie Ize-Iyamu that he will probe his (Oshiomhole’s) administration as laughable.

Ize-Iyamu, the Peoples Demcoratic Party (PDP) candidate in the September 10 governorship election of Edo State, had while speaking at the PDP campaign rally in Uromi, Esan North East local government, on Friday, said he would probe Oshiomhole immediately he is sworn-in as governor.

The PDP candidate vowed that every kobo that accrued to the state between 2008 and 2016 while Oshiomhole was governor, must be accounted for.

He further urged the governor to probe the eight years he (Ize-Iyamu) spent in office between 1999 and 2007 as Chief of Staff and Secretary to the State government.

“I call on Adams Oshiomhole to probe my time in government and look at everything that I did.

“Let him do it because by the grace of God, when I am governor, I will probe him.

“I will probe him; every kobo that has come to Edo State, must be accounted for. That is his fear; that is why he can no longer sleep.

“Adams Oshiomhole believes that the more he attacks, the more he can hide the truth”, Pastor Ize-Iyamu said.

In his reaction, Gov. Oshiomhole said Pastor Ize-Iyamu will first of all “vomit” the N1.2billion arms deal money, which he allegedly collected from Fidelity Bank and shared with the state PDP chairman, Dan Orbih, “after that he will go to jail before he can probe me”.

Speaking when the All Progressive Congress (APC) governorship candidate, Godwin Obaseki visited Fugar for a rally, the governor said: “Ize-Iyamu, Orbih and their fathers have confessed that they collected N700miilion and N500million to share during the election”.

He continued: “They go to Port Harcourt every day to visit EFCC. Dan Orbih was taken from Port Harcourt to Benin with a Black Maria where his house was searched.

“Today they are living in fear. But they must return the money. Look at the company between Ize-Iyamu and Orbih, now they are singing like witches in the night how they shared that money.

“But they must be prosecuted like Metuh and others because that was how they stole in Edo for ten years”.

Governor Oshiomhole pointed out that the money they (Ize-Iyamu and Orhih) allegedly shared was meant for Defence, for roads.

“For ten years they ruined the state but in seven and half years we have worked”, he added.

“So I laugh when he says he will probe. How can he even come in when he cannot win his ward?

“Edo people cannot vote for thieves at all so I wonder how he is going to probe me and that is why I said it is funny”.