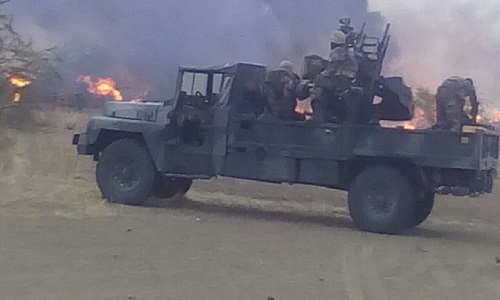 An attack by suspected Boko Haram gunmen on Tuesday evening was successfully repelled by troops of 119 Task Force Battalion stationed in Kangarwa, northern Borno State, the Nigerian Army has said.

A statement on Wednesday from army spokesman, Colonel Sani Usman, said the attack, which started at about 6.30pm, was successfully repelled after about 3 hours of exchange of heavy gunfire.

Col. Usman noted that as a result of the heavy gun battle, the insurgents were inflicted tremendous casualty.

The army spokesman, however, regretted to announce that two gallant soldiers paid the supreme price, while seven were wounded in action.

He, however, said due to poor visibility, the number of Boko Haram fighters killed during the battle could not be ascertained for now.

He also said the bodies of the gallant soldiers and those wounded in action are being evacuated while the unit is carrying out mop up operation.

“It should be noted that the successful repelling of the attack was made possible by support from the Nigerian and Chadian Air Force fighter jets”, the army statement said.