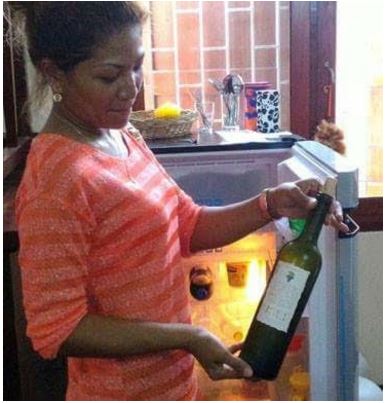 A heartbroken French man was discovered lying naked in the middle of the road on Friday night in Prachuap Khiri Khan city, Thailand.
The 62-year-old man was found just on Sala Cheep Road in front of a Guesthouse where he had been staying since July 14. His wailing could be heard all along the road at about 5:30pm.
Notified by some good Samaritans, police came and helped take the man, whose name was withheld, back to his room. At that point he decided to lock himself inside, but after a chat, officers were able to persuade him to come out again.
“We took him to the hospital as he was determined to be in a deranged state,” said police Col. Amphol Amornlakpreecha 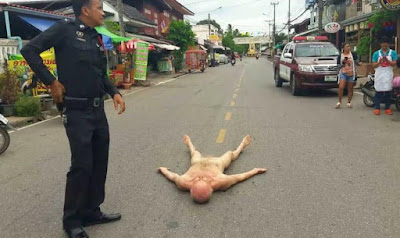 Kanokwan Saleephol, the 34-year-old guesthouse owner (pictured displaying the bottle of wine consumed by the Frenchman before he turned up naked in the road) said her guest appeared to be sad some days ago, saying he missed his wife whom he had split from before the trip to Thailand. She said nearly a full bottle of wine precipitated his appearance in the road.