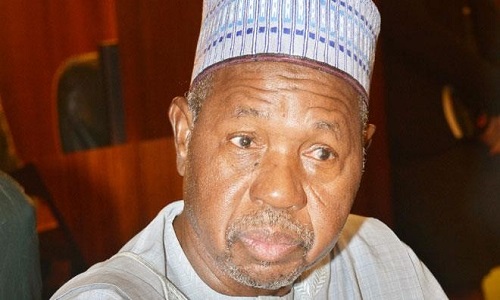 Governor of Katsina State, Alhaji Aminu Bello Masari, has blasted the Niger Delta Avengers, categorizing the militant group as a bunch of criminals.

He said he suspected that the Avengers might have been part of a threat by some Nigerians to make the country ungovernable, if a particular candidate did not win the 2015 presidential election.

Masari, who spoke with newsmen in Abuja yesterday, asked that “what are they avenging?” in reaction to the name of the militant group, which has sustained months of bombings of oil and gas installations across the Niger Delta.

He said: “As people, we must survive and live. With the crisis in the Niger Delta, we can wake up and see that not a dollar is coming from oil. Are we going to die? It is impossible. Let us start looking inward. We did it before, we can do it now.

“I believe, I still believe and I’m still convinced that when we do the right thing, not only in Katsina State, but across the 36 states, we will survive the storm and there will be no more dependence on any one commodity.

“Any single commodity you depend on, when the price crashes, you will feel the impact. I think your friends outside Nigeria should be very lucky. If you go to Angola, you can’t see effect of the low price because they don’t totally depend on oil.

“For those of us who are able to go to Saudi Arabia, we see these things. Almost 80 per cent of the capital projects have stopped. It is not only in Nigeria.

“But in our own case, coupled with when the prices start to pick up to about $40, then we have the criminals calling themselves Avengers. Avenging what?

“They said before election that if a particular candidate did not win, they would make Nigeria ungovernable. So what is coming now is not new, but Nigeria will survive it. There are countries without oil. Has Japan oil? Do Malaysia, Singapore, India have oil? Are they not surviving or thriving?”

“If there is determined leadership, these things are doable. Most of the problems confronting us as a state are beyond politics”, the Katsina governor asserted.