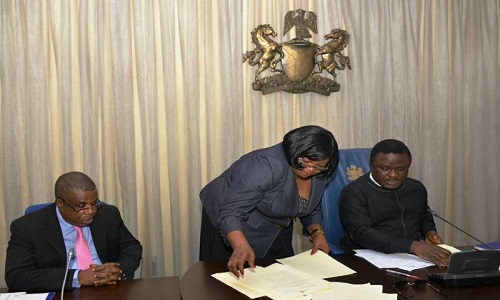 The Deputy Governor of Cross River State, Prof. Ivara Esu, has dispelled reports that some militants held him hostage in his office on Friday.

A group of young men, led by one ‘capon”, who said they belonged to the Bakassi Volunteer Force, invaded the Leopard Road, Diamond Hill office of the Cross River Governor and held everyone hostage for about three hours.

It was learnt that the daredevil militants arrived the Governor’s office shortly after Prof. Esu reported for duties.

Governor Ben Ayade was not on seat when the militants stormed his office as he was said to be out of the country for about two weeks now.

The militants, who stormed the state’s seat of power in apparent protest over alleged abandonment of the Bakassi returnees by the government, reportedly held the deputy governor and the staff hostage for several hours.

A statement issued by Mr. Christian Ita, the Special Assistant on Media and Chief Press Secretary to Governor Ben Ayade, said  “the report was not only misleading but a sad demonstration of ethical bankruptcy.

“The report is a regrettable sensationalisation of a peaceful protest by some ex-militants over their three months unpaid allowances by the Federal Government.

“The ex-militants were not armed and so could not have invaded the Government House. Rather, they were very civil in their conduct as they sought audience with the officials of the state government whom they hoped would take their message to Abuja. Once attended to, they peacefully dispersed”, he said.