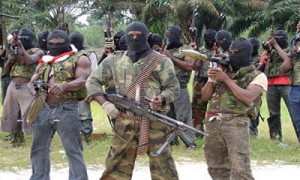 A Niger Delta militant group known as the Adaka Boro Avengers has issued a statement calling on ”sons” and ”daughters” of the Niger Delta region to be present as they declare the region a republic 1.

Spokesperson for the group, General Edmos Ayayeibo, issued a statement which called on notable people from the oil-rich region: former president, Goodluck Jonathan; elder statesman, Chief Edwin Clark; King Alfred Diete Spiff; Ankio Briggs; Joseph Eva; Patrick Fufein, Pastor Good, past and present military personnel from the region, present senators and members of the Houses of Representatives to be present at the official declaration of the Niger Delta republic.