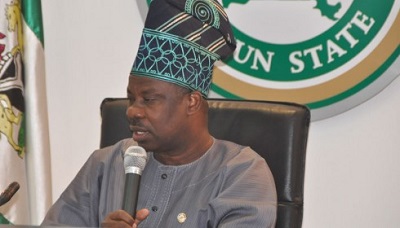 Indications have emerged that the Nigerian Navy is planning on setting up a base in Tongeji Island of Ogun State, to assist other security agencies in combating crime.

This indication was given on Tuesday when the Flag Officer Commanding, FOC, Western Naval Command, Ferguson Bobai, visited the State Governor, Senator Ibikunle Amosun, in Abeokuta.

According to Bobai, the new base is aimed at fighting “maritime illegalities”, which he said had become rampant in the area.

He disclosed that he had already visited the site to assess available facilities based on the directive of the Chief of Naval Staff.

Tongeji Island is a border community in Ipokia Local Government Area of the state on the Nigeria- Republic Benin border and is said to have a vast crude oil deposit.

When established, the FOC said the naval base would serve as buffer on the Nigeria-Benin Republic border.

“We have made some arrests since the beginning of this year stretching from people dealing with petroleum products and these products are gotten from pipeline vandalism and smuggling of contraband and drugs we’ve all seized in conjunction with Customs”, Mr. Bobai affirmed.

“So, it is hoped that when the naval base is established there, we will act as a checkpoint where people must pass to go to Benin Republic, and once our presence is established there, it’s like you virtually block them. We expect to see a decline in some of these illegal activities within that stretch”, he added.

Speaking on the incessant militant activities in the state, Mr. Bobai said “As a matter of fact, you know that there is an on-going operation called ‘Operation Awatse’. Awatse is a Hausa name to say scatter; so we hope that in a short while, the Operation Awatse would swing into intensive operations to ensure that all these places are cleaned up of these militants”.

Earlier, Governor Amosun urged the navy and Nigerian government to continue to assist the state in combating the militants.

Mr. Amosun also advised the federal government to take the Tongeji island issue seriously, to avoid the mistake Nigeria made with Bakassi Peninsula.