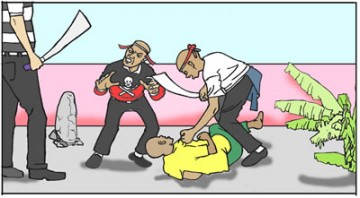 Reports gathered was that the hoodlums took to the streets of the community unleashing terror and disposing residents of their belongings.

According to a source in the community, fight ensued when rival cult members engaged themselves at a local beer parlour.

“It was like they had some unresolved issues among themselves, and in the course of the clash, one of the cultists was killed,” a source confirmed.

The source added that members of the deceased’s cultist’s group went on rampage, invaded the home of the former vigilante team Chairman and injured him with some sharp objects.

The State Police Spokesperson, Celestina Kalu confirmed the incident but said no one has been arrested.