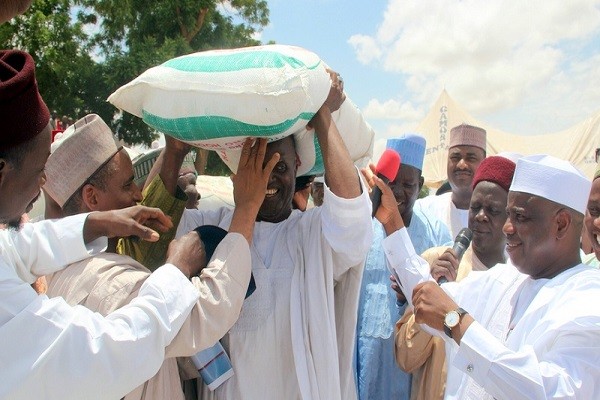 Governor Aminu Tambuwal of Sokoto State has directed security agencies to arrest and prosecute fertiliser middlemen across the state.

Mr. Tambuwal gave the directive in Shuni town, Dange/Shuni Local Government Area of the state on Sunday at the launch of the sale of fertiliser to farmers in the area.

The governor was represented on the occasion by his Commissioner for Solid Mineral and Natural Resources Development, Bello Goronyo.

He said: “With this directive, the security agencies should accost anybody they see with fertilisers and verify its source.

“You should seize any fertilisers you see without any valid, duly signed allocation papers.

“Such nefarious persons should also be immediately arraigned.in courts”.

The governor said the state government had subsidised each bag of the commodity by 70 per cent.

According to him, the fertilisers are of three brands; Urea, SSP and NPK.

“The gesture is aimed at assisting the farmers to produce more food, reduce unemployment and poverty, among other socio-economic malaise.

“So, the state government will not fold its arms and allow any unscrupulous persons to sabotage this noble gesture”.

On his part, the state Commissioner for Health, Balarabe Kakale, said the state government had accorded top priority to the agricultural sector.

Mr. Kakale warned the beneficiaries against selling the commodity and urged the youth to engage in farming as a way helping to diversify the nation’s oil-dependent economy.

The Chairman of the local government, Mode Dantasallah, said that the council had set up various sub-committees to ensure that only genuine farmers got the commodity.

The Director of Agriculture for the council, Abubakar Jabbi, said that the state government had allocated 4,800 bags of fertilisers to the council area.