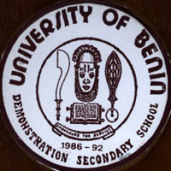 The Management of the University of Benin on Friday said it is ready to collaborate with the Edo State chapter of the Christian Association of Nigeria (CAN) to curb social vices in the institution and the state.

This is contained in a statement by the Public Relations Officer of the university, Mr. Michael Osasuyi, in Benin where the Vice-Chancellor of the university, Prof. Faraday Orumwense, stated this when he received the President of CAN in the state, Rt. Rev. Peter Imasuen.

Prof. Orumwense said the institution had been able to suppress social vices, especially cultism, adding that proposed collaboration with the Christian body to curb cultism in the state was a brilliant idea.

He disclosed that the institution had constituted “University of Benin Cult Renunciation, Reconciliation, Reformation and Rehabilitation Committee” to address the menace.

The president of CAN in the state commended the University for fighting the menace of the social vices, especially curbing the cultism whose rate had become alarming.

He also commended the academic performance of the institution, saying that “UNIBEN is a factory where lives are being modelled and it has produced great men and women”.

Rt. Rev. Peter Imasuen, who also doubles as the Bishop of Benin Diocese, Anglican Communion, commiserated with the vice-chancellor on the death of his mother.