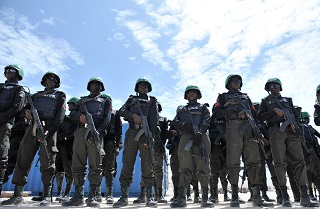 The Nigeria Police Force said it has detained eight of its officers in Nasarawa State over the killings of 2 persons during the recent workers protest to the government house over 50% salary cut.

The State commissioner of Police, Mr. Abubakar Bello, disclosed this on Thursday in Lafia while addressing journalists, he added that the incident occurred during a recent visit of the National President of Nigeria Labour Congress (NLC), Mr. Ayuba Wabba, to the state.

Mr Bello said the case had been transferred to the Criminal Investigation Department at the Police headquarters for full investigation.

He said that the doctor, who conducted an autopsy on the two victims “said that one died from injuries sustained from a hard object while the other died from a pellet”.

The commissioner, however, said that the pellet extracted from the deceased did not match the gun used by policemen stationed at the Government House gate.

It would be recalled that the NLC president was in Nasarawa on Friday to hold talks with the state government over the protracted industrial dispute in the state.

Waba told newsmen in Lafia that unknown policemen shot four workers at the gate of the government house, while they were awaiting the outcome of the NLC meeting with Gov. Umaru Al-Makura.

He said that one of the shot workers died instantly, while another died later at the National Hospital in Abuja where he was referred to for further treatment.