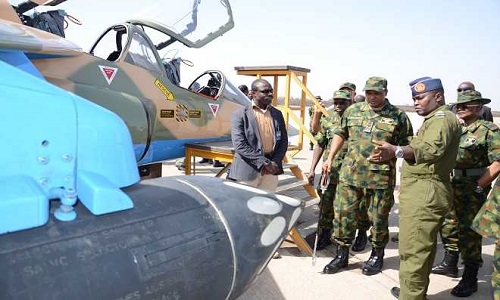 The Nigerian Air Force on Tuesday said to successfully prosecute the war against Boko Haram in the northeast, its fighter jets and other platforms, consumed an average of 1.9million litres of aviation fuel monthly.

The NAF has been a major component of the Operation LAFIYA DOLE in the Northeast, providing support to ground troops by way of aerial reconnaissance, movement of equipment, personnel and medical supplies as well as bombardments of confirmed terrorists’ locations.

At the current rate of N200 per litre of aviation fuel, the NAF spends a minimum of N380million each month to keep its aircrafts functional in the mission area.

The Chief of the Air Staff, Air Marshal Sadiq Abubakar, disclosed this at the opening ceremony of the NAF Logistics Seminar tagged “Repositioning NAF logistics for efficient employment of air power in response to contemporary national security imperatives”, held in Lagos on Tuesday.

According to Air Marshal Abubakar, NAF has managed to continue its operations across the country despite the scarcity of aviation fuel because it was determined to ensure that no Nigerian territory was under siege.

He said: “To support air operations in the northeast, the NAF must put an excellent plan that will ensure availability of aviation fuel in the operational area, whether the product is locally available or not. The service consume an average of 1.9 million litres of aviation fuel monthly.

“The main fighter air plane we use, consume 2500 litres/hour and we fly at least two air planes at a time. At that consumption rate, the two consume 5,000 litres every hour and we run two missions”.