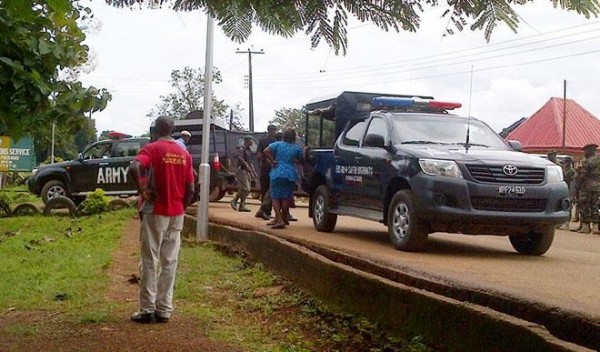 All hell was let loose at the Kuje Prison in Abuja on Monday morning as inmates staged a riot at about the time officials arrived at the facility for their routine duties.

It was learnt that the riot broke out at about 10.30am from one of the blocks and quickly spread to other blocks within the facility.

While the source of the protest by the inmates could not be immediately ascertained, it was gathered that heavily armed security operatives released canisters of tear gas towards the cells where the riot broke out.

The spokesperson of the Nigerian Prison Service, Francis Enobore, confirmed the incident but did not give details.

“We have received a report of a problem in Kuje Prison but give me a little time to get the facts on it as some of our men are already on the ground to handle the situation”, he said in response to an enquiry by reporters.

“We are monitoring what is happening. I will revert to you as soon we get more detail from our men on the ground”, Mr. Enobore added.

The Nigerian Prison Service has been in the news of late for wrong reasons.

In June, two inmates standing trial for culpable homicide escaped from the Kuje Prison and since then, have remained at large. On July 30, not less than 13 inmates escaped from Koton Karfe prison in Kogi State with five of the escapees recaptured while on August 9, another jailbreak was reported at the Federal Prisons in Nsukka, Enugu State.

Fifteen inmates were believed to have escaped with six of them, re-arrested.

Also, this August, no fewer than 14 inmates of the Abakaliki prison in Ebonyi State capital, were feared killed during a jailbreak bid under the cover of a prison riot.

The Controller, Nigeria Prisons Service (NPS), Federal Capital Territory (FCT) Command, Daniel Odaro, has disclosed that no inmate or prison personnel was killed in the riot that broke out at the Kuje Prisons earlier today.

We’d earlier reported that a riot broke out at about the time officials arrived at the facility for their routine duties.

Mr. Odaro, who spoke in an interview, also pointed out that no injury was recorded during the fracas, which he attributed to a minor misunderstanding between inmates and prison officers at the facility.

“There was a quarrel between the inmates and the officers who are working there, nothing more than that.

“We were trying to search the blocks, which is a tradition in prisons all over the world in order to discover illegal items that have been brought in through trafficking, but some of the inmates prevented our officers from searching their block”.

On the reinforcement of security personnel at the prison while the crisis lasted, the Controller said it was a “normal thing”.

According to him, the deployment of additional security personnel should not misconstrued for a riot, as widely reported.

He said because of the misunderstanding that ensued, the Service could not continue with the routine search.

He said orderliness has been restored while those who instigated the “misunderstanding”, have all apologized.

Mr. Odaro, however, didn’t confirm if disciplinary measures will be taken against those found guilty or not.