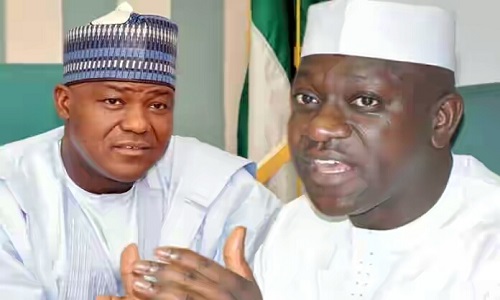 There will be no sanctions for the Speaker of the House of Representatives, Yakubu Dogara and former Chairman of the Committee on Appropriations, Abdulmumin Jibrin, over the alleged budget padding scandal, the All Progressives Congress (APC) said yesterday.

The APC, which waded into the controversy that is threatening the fragile peace in the green chambers, directed the lawmakers in the eye of the storm – Messrs. Dogara and Jibrin – who incidentally are its members, to desist from a media war but latest developments point to the fact that the ceasefire order was disobeyed by both parties, prompting calls for sanctions against the errant party members.

But the Deputy National Chairman (North) of the APC, Senator Lawal Shuaibu, told reporters at the party’s national secretariat in Abuja that its constitution empowers it (APC) to take certain steps, but it would not do so in order not to unsurp the functions of law enforcement agencies.

RELATED: APC To Jibrin: Keep Quiet And Stop The Public Show Of Shame

He said: “Article 7 (5) of the APC constitution gives us the power to do certain things. So, you see, what we are doing is the right thing. But only we don’t want that in the public gallery”.

Shuaibu asked “what is padding?” saying the party would not sanction anybody for that. “What is of concern to us is where any member contravenes the party constitution in his conduct”, he stressed.

“The two members that are subjected to this are elected or appointed members of the party including those that are holding public office. So, you expect the party to sit down and watch. No. We have to do our work. So, the question of sweeping anything under the carpet does not arise at all. But we don’t want to do it in the market place, in the party secretariat”.

On the funding of the party, Shuaibu said: “We have a credible source of funding. Every member of APC in this country pays N100. So far on our data base, we have 12.7million registered members. Others are still waiting for us to just open our portal to do their membership registration.

“Assuming those on our data base paid their membership levies, just calculate N100 of 12.7million members for you to know how much we can get. So we have our way of sourcing for fund.”

Speaking on the hues and cries of hardship by Nigerians, the former senator said: “You are talking of hardship. This government is just one year old. Sixteen years of destruction and you want the magic in just only one year? Nobody is talking of 16 years of the destruction that brought the hardship.

“But when the destruction was going on, people were praying for somebody who could correct all these things and reconstruct the country. But nobody said it will just happen overnight. It is not possible. I think if you have a scratch on your hand now, it will take some time to heal. But the system destroyed so many things. It was an atmosphere where impunity was officially recognised”.

On filling vacant party positions, he said: “There is a committee looking into our constitution, we are waiting for them. It will be a mini-convention. What we want to do is to amend some parts of our party constitution after operating this one for about two years. Where it is inadequate we want to perfect it”.