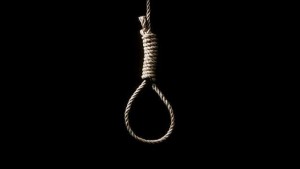 Ekue reportedly used a rope to hang himself by the rod of a ceiling fan in his apartment on Oki Lane over the failure a company he works for to pay his five-month salaries.

According to his family members, Ekue had been facing hard times since April 2016, when he stopped going to the company.

With a salary of 30,000 per month, he reportedly became frustrated when feeding became difficult for him.

His only son who is a salesman, identified simply as IK, had been supporting him with his meagre wages.

A neighbour of Ekue, Simon Davies, revealed that IK had gone to buy food for the father when the incident happened.

He said, “His son had gone to buy food for him that evening. But when he returned, he saw his father’s body dangling from a rope and he raised the alarm. People went into the room to help rush him to a hospital, but he died.

“The main cause of the incident is the non-payment of his salaries by a paint company he worked for as a driver. I learnt he earned N30,000 monthly and the company owed him five months’ salaries. He stopped going there in April when the arrears were not paid. Since then, his son had been feeding him with the little he earns at a boutique where he works.”

Another neighbour, Ruth, said the death of Ekue’s wife two years ago compounded his frustration.

“He had been lonely since he stopped going to work. His only son, who should have been with him, had to run around to provide food for him. Aside that, his wife died about two years ago which really shook him. I was shocked when I heard he committed suicide…” she added.

Police from the Anthony division were said to have removed the corpse and had it deposited in a mortuary.

The Lagos State Police Public Relations Officer, SP Dolapo Badmos, confirmed the suicide, adding that Ekue’s corpse had been deposited in a morgue for autopsy.

She said, “One John Ekue allegedly hanged himself with a rope tied to the ceiling fan in his room. Detectives visited, examined and photographed the scene. The corpse was removed and deposited in a morgue for autopsy.”