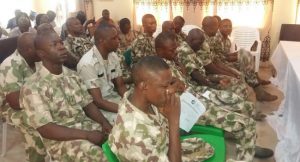 Four officers and sixteen other ranks of the Nigerian Army are facing Court Martial over offences committed in the theatre of the Operation Lafiya Dole.

According to him, the aim is to achieve timely and quick dispensation of justice.

Gen. Ezugwu appealed to the prosecutors and accused to bear that in mind and avoid antics such as frivolous call for adjournment to cause unnecessary delay.

He also advised the court to avoid bias and decisions based on external pressure, such that the judgement passed stands the test of Appellate Court and public opinion.

Gen. Ezugwu told journalists that the offences of those arraigned varies from theft and sales of ammunition to murder in the course of operations.

The 20 soldiers are being arraigned at the maiden court martial, proceedings on account of the weight of their offences.

The GOC further stated that over a 100 soldiers have been tried and punished at the Brigade level over acts of indiscipline and unprofessionalism.

50,000 soldiers have also been awarded medals of excellence on the theatre of operation for patriotism and gallantry.

The president of the Court Martial, Gen. OG Adeniyi has assured the accused of fair hearing and justice.

The prosecutors have sought adjournment till September 5, 2016, the defense did not oppose but have applied for an open arrest for the accused who have been in military detention form 6 months to nearly 2 years.