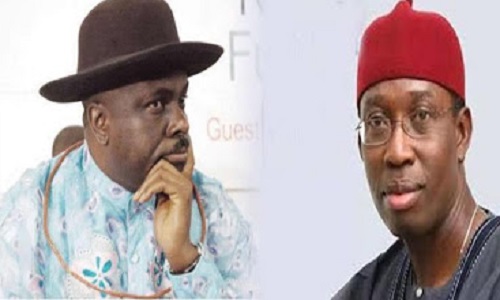 Governor of Delta State, Senator Ifeanyi Okowa has felicitated with a former governor of the state, Chief James Onanefe Ibori on his 58th birthday today, August 4.

In a congratulatory message to the former governor, signed by his Chief Press Secretary, Charles Ehiedu Aniagwu, the Delta governor hailed Mr. Ibori’s “sterling contributions” to the development of the state and Nigeria, as a whole.

Ibori, who was governor of oil-rich Delta State between 1999 and 2007, is currently serving a 13-years jail sentence in London after admitting fraud of nearly £50million. He was sentenced by a Southwark crown court in 2012.

Gov. Okowa in the message, extolled the enigmatic political prowess of Ibori, who he called his former boss and described him as an “astute administrator and leader of impeccable disposition”.

According to the governor, the sterling contributions of Ibori to the development of Delta State and Nigeria is legendary, and will remain a subject of discuss by contemporary political watchers.

The message reads: “On behalf of the government and people of Delta State, I wish to felicitate with a leader par excellence, Chief James Onanefe Ibori, on the occasion of his 58th birthday on Thursday, August 4th 2016.

“My distinguished leader, that Oil producing states of the Niger Delta are enjoying 13% Derivation today is unarguably due to your indefatigable role as a champion of Resource Control and Fiscal Federalism.

“Deltans and Nigerians cannot forget in a hurry how you laboured to the build the most virile, potent and undefeatable political force in Delta State, even as your legacies still dot the nooks and crannies of the State.

“In a life that has seen you clocked 58 years amidst your achievements in public service and political endeavours, there is great cause for you, members of your family, your many associates, protégés and well-wishers to thank Almighty God for His benevolence upon you.

“As you deservedly celebrate this birthday, it is my prayer that Almighty God continues to bless you with robust health and many more years of happiness.

“I join your family, friends and well-wishers to thank Almighty God for His continued guidance, protection and provision for you in the past 58 years of a life of outstanding contribution to humanity”.