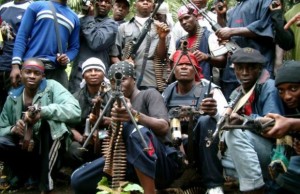 Reports indicate that there has been a split amongst the Niger Delta Avengers (NDA).

The split was announced in a statement, with the breakaway group announcing itself as the Reformed Niger Delta Avengers (RNDA).

According to the statement read by a Cynthia White, the RNDA decided to split from the Niger Delta Avengers after an appeal by former President Goodluck Jonathan and its conviction that the peace initiative of the Movement for the Emancipation of the Niger Delta (MEND) is genuine.

The new group also promised to reveal the identities of those behind the resurgence of violence in the oil-producing region.

“We have decided to join the MEND Aaron Team 2 peace initiative through the clearing house of Niger Delta Dialogue and Contact Group (NDDCG) headed by HRH King Alfred Diette-Spiff.

“We will also cooperate with the government by exposing the identities of our comrades who remain stubborn in their insistence to continue attacks.

“For example, it will shock the nation to know the Jekyll and Hyde personality behind the pseudonym ‘Brigadier General Murdoch Aginibo’ and our sponsors,” the group threatened.

It also called on members of the Indigenous People of Biafra (IPOB) to take advantage of the olive branch concession secured by MEND to the agitation for a Biafra Republic, which it branded an anachronism.

“Those advising Mr. Kanu (Nnamdi) to do otherwise do not love him nor appreciate the level of treason this simple act of common sense and humility can extricate him from.

“The Niger Delta will no longer be your proxy in a war to achieve your ambition.

“To our comrades in the NDA, we urge you to stop being defiant and embrace peace and the wise counsel we all received from former President Jonathan,” the RNDA said.