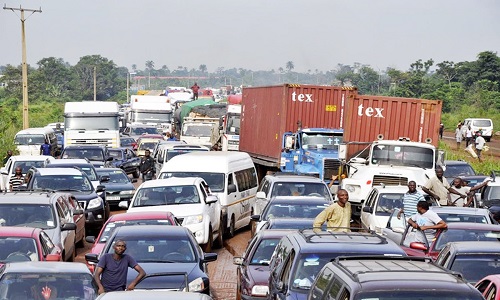 The Ogun State government has expressed deep concern about the hardship being faced by commuters on the ever busy Lagos-Ibadan expressway on account of the ongoing reconstruction work being carried out by Julius Berger Plc.

Subsequently, it has directed that with effect from today (Monday), August 8, 2016, the contractor shall not work on the expressway during the peak traffic hours, namely from 6am to 10am and between 4pm and 10pm.

“We encourage the contractor to work full blast between 10am and 4pm and also during the night after 10pm”, a statement by the Commissioner for Information and Strategy, Dayo Adeneye, said on Sunday.

According to the statement, the directive became imperative following the observation that the already bad traffic situation on the expressway was further compounded by the increasing spate of armed robberies reported along the road.

“The Ogun State government welcomes the ongoing reconstruction works in the full realization of the fact that this will ultimately bring greater relief to our people. We however note that the effort has come with temporary pain, in the nature of perennial traffic congestion and security challenges”.

Mr. Adeneye noted that in the past few weeks, the Ogun State Government took two steps to ameliorate the suffering of Nigerians, who regularly commute on the road.

“We increased police and security patrols on that axis and opened up discussions with the Federal Controller of Works, Ogun State and the contractor. We suggested that they should consider working late evenings and overnight in order to ameliorate the disruption to the lives of commuters on the ever-busy expressway and Ogun residents. It is a thing of regret that our suggestion was spurned.

“The state government made this request based on experience. We recall that before the advent of the Senator Ibikunle Amosun administration, armed robberies occasioned by bad portions of the road; traffic congestion caused by unruly drivers driving against the flow of traffic and tanker drivers parking indiscriminately on the median, were the order of the day”, he said.