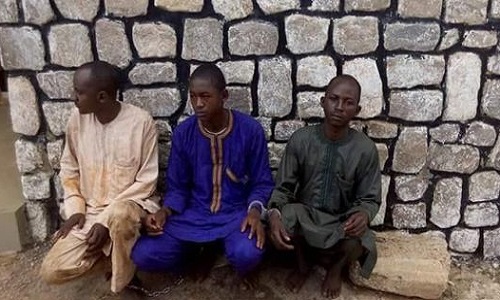 A notorious gang responsible for kidnap-for-ransom, has been arrested by the Police.

The gang was particularly linked to kidnapping and violent crimes along Kaduna-Abuja and its environs.

The kidnappers; Haruna Adamu (25), who is the gang leader, Shaibu Adamu (18) and Abubakar Saidu (30), were arrested after coordinated and painstaking investigation by the Intelligence Response Team (IRT) of the Inspector General of Police’s monitoring unit.

They were trailed and rounded up at Ungwan Kawu village in Dan Dumi L.G.A in Katsina State.

According to a press statement by the Force Public Relations Officer, DCP Don Amunah on Thursday, exhibits recovered from the gang include N250,000 buried in the ground in a bush at one of the suspects’ village and a Gionee phone, which was used for negotiation.

The statement said this particular gang was responsible for the kidnap of a serving member of the House of Representatives, Sani Bello, on 2nd August 2016 in his farm along Kaduna–Abuja road and other cases traced to them.

“During interrogation, the suspects confessed to the commission of the offence and also admitted to the various roles individually and collectively played in their criminal enterprise.

“They also assisted the Police to apprehend other fleeing members of the gang”, Deputy Commissioner of Police Amunah said.

He added that the suspects will soon be arraigned in court.