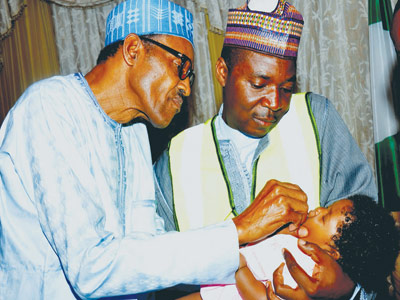 Nigeria’s progress towards attaining a polio-free status has suffered a setback with reports of two fresh infections of wild polio virus in Borno state.

The World Health Organization (WHO) was set to declare the country polio free if it made it to July 24, 2017 without outbreak of a new case.

The last known infection was July 24, 2014 in Kano State. Nigeria was the last country on the continent to report active transmission of the wild polio virus.

Health authorities have been silent about the new cases in Gwarzo and Jere local government areas of Borno.

It is unclear how the WHO will respond to the resurgence of the wild polio virus infections in Borno.

It would be recalled that last week, a number of civil society organisations raised concern about N12.8 billion immunisation fund yet to be released only four months to the end of 2016.

“We have less than five months to the end of 2016 yet nothing has been released for immunization, for procurement of vaccines and other logistics”, said Dr Aminu Magashi, project director for Community Health and Research Initiative, part of the coalition Partnership for Advocacy for Child and Family Health, PACFaH.

“As a nation we cannot continue to depend on development partners to buy the vaccines we need in the country yet we have funds for such purposes in our budget”, Dr. Magashi was quoted to have said.