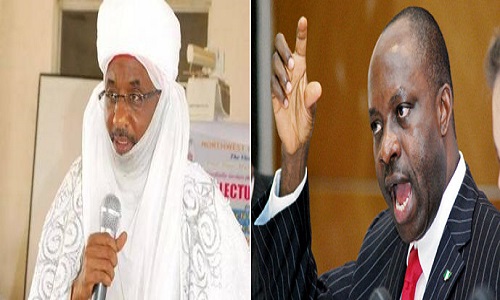 The Presidency has reacted to speculations that the Federal Government had launched investigations into the activities of two former Governors of the Central Bank of Nigeria, CBN, Professor Charles Soludo and Muhammadu Sanusi II, Emir of Kano.

The duo had at separate forum last week, criticized some of the economic policies of the President Muhammadu Buhari administration.

While Soludo spoke at the Progressive Governors Forum’s 4th‎ progressive governance lecture series in Kaduna State last Thursday, in which he faulted the anti-corruption war of the Buhari administration as well as proffered solutions to Nigeria’s economic challenges, Malam Sanusi II said the president risked ending up in infamy like former President Goodluck Jonathan.

The emir spoke last Wednesday while delivering a paper entitled, “Nigeria In Search Of New Growth model” at the 15th meeting of the Joint Planning Board and National Council on Development Planning in Kano.

The comments credited to the former heads of the country’s apex banks led to reports in a section of the media at the weekend that the FG was considering probing their tenures.

Citing a top Presidency source, the reports said the probe would specifically cover the activities of the apex bank between 2007 and 2014 when Soludo and Sanusi were Governor.

Although the reports stated that President Buhari was yet to finally give his blessings, the probe would focus on the printing of naira notes under the authorization of Soludo and the management of CBN’s “surplus” finances under Sanusi.

Reacting to the reports, the Senior Special Assistant on Media and Publicity to the President, Mallam Garba Shehu, denied any planned probes of the former CBN Governors.

Mr. Shehu made the clarification via his verified Twitter handle on Monday night.

The checks I made today indicated that the Presidency is unaware of the reported probe of Sarkin Kano, Muhammadu Sanusi II & Prof. Soludo.

Where did that report come from? Under our constitution which President @MBuhari swore to uphold, it is not a crime to offer suggestions.